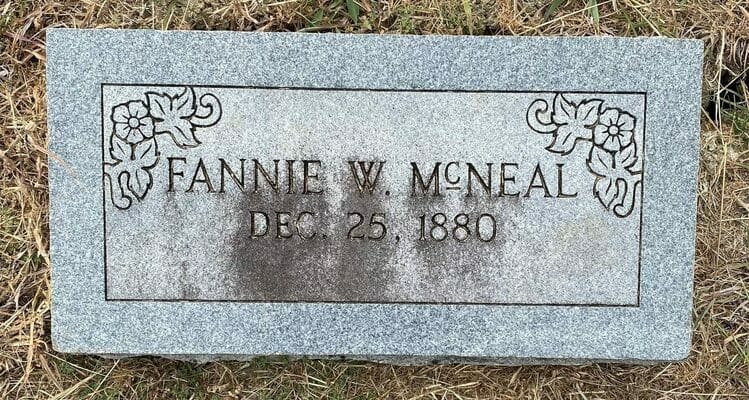 Uncovering the stories behind graves of women, even those who lived in the 20th century, is often a challenge. Newspaper reporters didn’t refer to women by their actual names but by those of their husbands (i.e., Mrs. John Smith). Given and maiden names must be tracked down, and sometimes it is no easy feat. But with a clue here and another there, a story can begin to take shape. On occasion, the story may be a notable, but mostly forgotten, piece of a community’s history. Such is the case of Mrs. Leonard McNeal, a resident of Roxton for 73 years. In a time when women seldom received recognition for contributions to their communities, Mrs. Mcneal, known to friends as Fannie, was an exception.

Fannie Adams was born in Mississippi in 1880, the second daughter of William Bramwell Adams and his wife Mary Jane. Adams, a Georgia native, served the duration of the Civil War in the Confederate Army, reaching the rank of corporal in the 23rd Mississippi Infantry. His unit fought in several battles – mostly in Tennessee. Late in the war, Corporal Adams served time as a prisoner of war at Illinois’ Fort Douglass, where he remained until war’s end. Adams then made his way to Mississippi where he worked as a farmer, eventually marrying in 1879. After building a family of two daughters, the Adams’ remained in Mississippi through the 1880s.

In 1893, Fannie Adams and her family moved to Lamar County, Texas, settling in the countryside near Howland. The family continued to operate a farm, with Fannie doing her part to keep it afloat during the hard years of the late 1890s. Later, she attended an unknown college for a time, but she never graduated. Instead, in 1902, she married David Leonard McNeal, a Roxton farmer.

Fannie McNeal could have been the traditional farmer’s wife. She worked as hard as her husband and gave birth to three children between 1912 and 1917. But Fannie held aspirations in the community. She became active in civic affairs, at least to the extent society allowed females to participate in the early 1900s. Even after her husband grew chronically ill in the 1920s, Fannie became a presence in Roxton, involving herself in school activities and other organizations. She was especially active in the agricultural-based Women’s Demonstration Club, serving for a time as the Roxton chapter president.

Everyone has their 15 minutes of fame, and it was Fannie’s involvement with the Women’s Demonstration Club that brought her fame in 1931. Fannie’s recipe and technique for churning butter made Roxton proud, winning first place at the county demonstration level. In the state competition held at College Station a month later, she was awarded second place, an impressive feat for someone from such a small town. Perhaps her success in the butter competition led to her receiving what was likely the greatest honor a Roxton woman could receive just two years later.

Agricultural fairs have always been popular in Texas, primarily during the early fall months of September and October. In 1933, the Lamar District Fair – a display of the most impressive agricultural and homemaking achievements in the area – had been scheduled well in advance to begin on Monday, September 16, 1933. Thousands of fair goers from across Northeast Texas would attend, and the event was always a success. Similar fairs were often held at the county level, and large cities sponsored their own agricultural fairs. And while they weren’t as extravagant as county or district fairs, some smaller towns across Texas held fairs of their own, normally short events to honor the best farmers and homemakers a town had to offer. As the District Fair of 1933 approached, Roxton leaders, with the assistance of those from Paradise, set their eyes on a small fair of their own. It would be the first agricultural fair ever for Roxton, promoted as the Roxton Agricultural and Educational Exhibit.

Knowing the District Fair would begin on September 16, the Roxton group wasted no time in getting organized. Nearly a full week before the fair was to be held, on September 8, a committee met to name a chairman for the event. Likely for her involvement in leading the Women’s Demonstration Club and bringing fame to Roxton with her award-winning butter, the committee selected Mrs. Luther McNeal to head up the event. It would be held the weekend before the District Fair, leaving Mrs. McNeal a full six days to put together a two-day long program.

Exactly how Fannie McNeal managed to organize what became known as the Roxton Community Fair in such a short time is largely lost to history. As every major community event begins with a parade, she first delegated the duties to K. Hunter Bywaters who came up with a theme for the parade – “A Century of Progress in Transportation.” What else went on behind the scenes over the next few days isn’t well documented, but The Paris News reported the fair to be a stunning success, and even credited Mrs. Luther McNeal for organizing the event. The fair reportedly attracted thousands of people from surrounding counties, more than had ever before congregated in Roxton. How word of the event spread so quickly and reached so many people in such a short time is not documented.

To begin the fair, an estimated 2,000 people lined what is now Harrison Street to watch a mile-long parade celebrating Roxton’s past with a focus on how transportation has changed the community. K. Hunter Bywaters led the parade riding atop a “prancing steed.” Many entries followed, including a band of men dressed in Indian attire and shouting “war whoops.” Next came a team of oxen pulling a covered wagon, a circuit rider, an old-fashioned doctor in his carriage, along with floats depicting the lives of Roxton’s pioneers. In a showing of how transportation had progressed, Roxton businessmen rode “fancy stepping saddle horses” and were followed by an uncounted number of automobiles, trucks, and tractors. Finally, in what must have been an amazing display and a first sight for many rural residents, Paris businessman Henry Ayers swooped over Roxton in his airplane, the most modern version of travel.

The crowd grew throughout Friday and into Saturday. Spectators filled the Bywaters building where hoards viewed the exhibits of the Women’s Demonstration club and Agriculture club with great interest. Quilts, dresses, artwork, rugs, and hundreds of other items were on display. A platform was erected on Front Street where a variety of programs, including a band, entertained the crowd.

The Paris News took note to mention what it deemed to be an “unusual feature” of the Roxton Fair – a special division held just outside the city limits where the black community displayed its own home demonstration and agricultural exhibits. And fairgoers did not overlook their efforts. Most who traveled to Roxton took in all the fair had to offer. It was truly a community event, and “no detail was overlooked.” While reports suggested that men were involved in the planning of the fair, news accounts gave lavish praise for Fannie McNeal andher efforts organizing the event on short notice.

After her fair-organizing experience, Fannie McNeal resumed her role in the community and at home. In 1944, her husband died in Roxton, where he is buried in Restland Cemetery NW corner. Fannie eventually left the community she had called home for over half a century, moving to Palestine to live with her children. She died there in 1973.

Despite her notable work in Roxton over the years, if one wanders the NW portion of Restland Cemetery, Fannie McNeal’s grave marker will be elusive. But her husband’s stone – large upright – stands above many others. Beside it, level with the ground, rests a small marker paying respects to Fannie W. McNeal. While a birth date is inscribed on the stone, no date of death has been added. It seems that even in death, people of the 19th and 20th centuries never fully recognized the contributions of female residents. Even Fannie McNeal, whose documented accomplishments far exceeded those of her spouse, is destined to remain in