In case one of these ever developed a taste for your flesh, watch out! 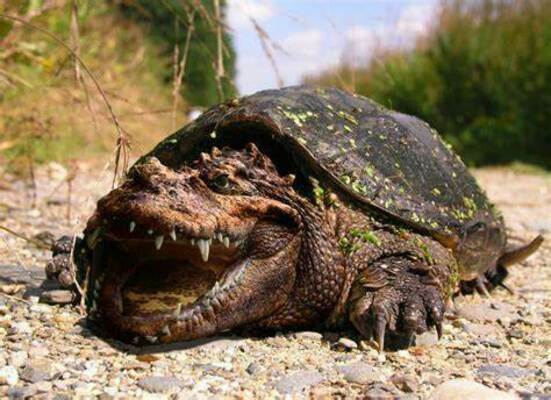 In 2017, Texas Game Wardens, in coordination with the Service’s Office of Law Enforcement, investigated the poaching of alligator snapping turtles. Large turtles up to 150 pounds were being poached in Texas and transported into Louisiana, which is a federal Lacey Act violation. Alligator snapping turtles are a popular food item with a restricted limit of one per day in Louisiana. This has led to a smaller population of the species in Louisiana, along with poaching in Texas where harvest is illegal.

The turtles were transported to East Texas from the Natchitoches National Fish Hatchery in Louisiana, where they were being held following their seizure by law enforcement in 2016.

“Alligator snapping turtles have been protected in Texas since the 1970’s,” said Meredith Longoria, Deputy Director of the TPWD Wildlife Division. “We have a unique opportunity to not only return these turtles to their range in Texas from which they were taken, but also to learn more about their habits and their biology so that we can more effectively conserve Texas populations to ensure their viability for generations to come.”

“I am very proud of the Service’s role in helping to rescue these alligator snapping turtles from the illegal wildlife trafficking market and return them back to where they belong in East Texas,” said Amy Lueders, the Service’s Southwest Regional Director. “I also want to acknowledge the teamwork of everyone who made this return possible: from our own Service law enforcement, hatchery and ecological services staff to the TPWD, river authority, university and non-profit organization staff who provided their time, funding and logistical support to get these living dinosaurs back into the wild. The success of this project demonstrates our shared commitment to protecting and conserving wildlife in Texas.”

TPWD Nongame and Rare Species Program staff have worked with turtle researchers across Texas and the Turtle Survival Alliance to support the development of a genetic analysis on all of the turtles that were released in order to determine the river basin where they originated. In addition, veterinarians evaluated each turtle to ensure the health of the species and fitted each with radio telemetry tags to allow researchers to monitor the turtle’s survival, habitat use, and movement throughout their lives.

More information about nongame and rare species in Texas, including species listed as threatened or endangered, can be found on the Wildlife Diversity page of the TPWD website.

Roxton, Newspapers, and the Progress