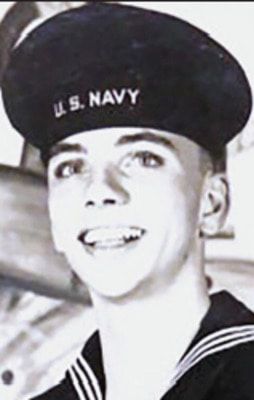 He was born on Dec. 8, 1932 to parents James Reagan McDonald Stallings and Nell Lucile Julian Stallings, in Paris. He was proud to be a native Texan from that day forward.

His friends, Skillet Head Dietz, Fleemo Reece, Skis Berry and Avance, called him “Eyes”, and that name stuck with him the rest of his life.

“Eyes” was a lucky man. He married the love of his life, Ellen “Sue” Ball, and she could dance the Jitterbug just as well as he could. They remained married for 63 years until her death in 2018.

He proudly served his country in the U.S. Navy and was on the same ship with his brother “Ears,” James Stallings, during the Korean War.

He was lucky to be born with a giving, happy, and entertaining nature. Nothing was beneath him when he was making people laugh. Luckiest of all were his family to have been given such a loving husband and father.

Funeral services were held March 1. He was laid to rest beside Sue at Evergreen Cemetery.